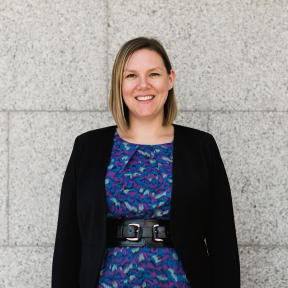 Kirsty is the joint Director and owner of McLaren Associates and recruits across all industry sectors, for roles up to and including Chief Executive and Board appointments.

Recruitment is in Kirsty’s blood and growing up she looked up to her father, Peter McLaren, who worked extensively in the industry and established McLaren Associates in 1989.

It was during Kirsty’s OE in the UK when Peter asked Kirsty to join the business upon her return, which she did in January 2010. Prior to travelling to the UK, Kirsty recruited for a large New Zealand owned recruitment agency and also gained a wide range of experience through her previous HR roles at KiwiRail, Vector and IHC.

Kirsty is committed to providing the highest level of service to her clients and candidates and to achieving positive outcomes for both parties.

In 2019, Kirsty received a Kiwibank Local Hero Award for the work she does in connecting Not for Profit organisations with amazing talent, which enables them to undertake their important work in the community.

Kirsty juggles a busy life between work and home, where she has two young kids, a giant black Labrador and beautiful British Blue cat.